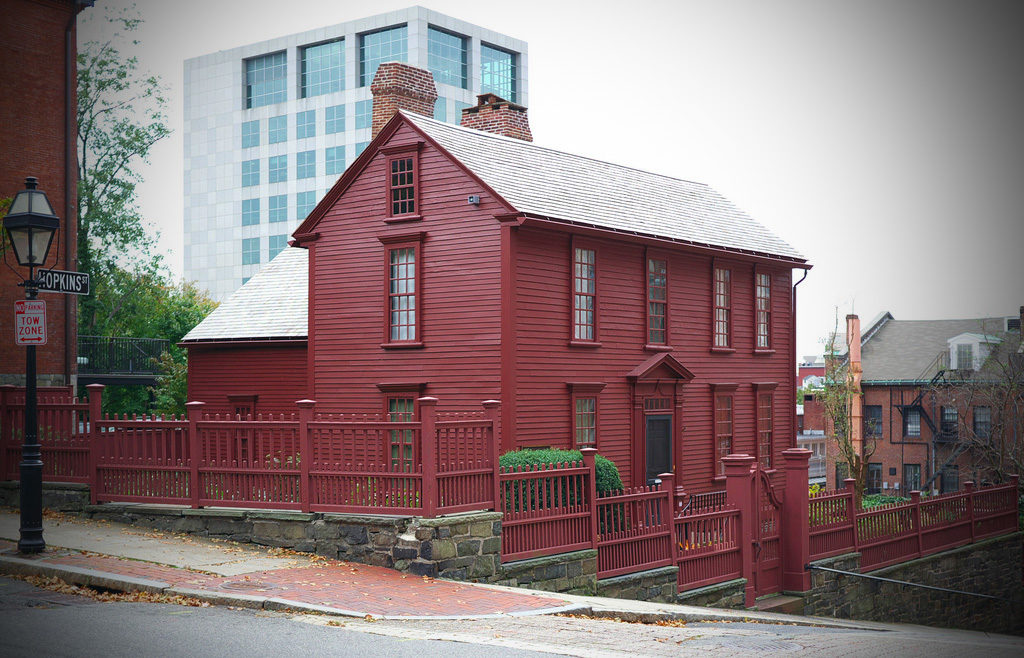 Stephen Hopkins (March 7, 1707 – July 13, 1785) was a governor of the Colony of Rhode Island and Providence Plantations, a Chief Justice of the Rhode Island Supreme Court, and a signer of the Declaration of Independence. His political career included 25 years in the General Assembly, seven as Speaker, nineteen years a judge, and ten terms as Governor. He attended the Albany Congress of 1754, both Continental Congresses and signed the Declaration of Independence. Though self-educated, Hopkins was Brown University’s first Chancellor. He established Providence’s first newspaper, first schoolhouse, first library (now the Providence Atheneum) and also one of Rhode Island’s first iron foundries.

Stephen Hopkins for centuries has been hailed a leading patriot of colonial Rhode Island. Few better understood or more eloquently expressed the workings of the fledgling merchant economy, and it’s critical dependence on trade with the West Indies and the slave trade. Likewise, no one exemplified more clearly the benefits that could accrue to this small leading class of merchants than Hopkins. By leveraging their personal power over trade, and the political and legal system, they pursued private gain through all levers of power available to them: privateering against other colonies, corruption of the state and judicial system, trade with the enemy, smuggling against the crown, and later, freeing their merchant trade from British control. And Hopkins, more than any other, pursued every one of these objectives with unbounded enthusiasm, and often some historians say, to the point of recklessness.1

The Launching of a Career

Stephen Hopkins, a descendant of Rhode Island assembly leaders and wealthy merchants, was well-poised to launch his career in the Rhode Island assembly by 1732. By 1742 he was Assembly speaker, and used his influence and wealth to his advantage in the King George War as a owner of privateers attacking the French for treasure, rum and slaves. During this war over 100 French ships were captured by Rhode Island privateers.

In 1744, Hopkins bankrolled the sloop Reprisal, of 28 guns, and 80 men, commanded by his two brothers, John and William (the latter, already a successful privateer). Using his government office, Hopkins obtained a coveted Admiralty Letter of Marque to attack foreign vessels. The Reprisal was the first Rhode Island vessel to capture a French vessel. In the next three years they captured sugar, rum, sugar, cocoa, coffee, indigo, cotton, gold, weapons and slaves from French, Dutch, Danish and Spanish ships. Hopkins’ brother John was killed attacking a Spanish vessel. One Danish prize vessel alone was valued at more than 15,000 pieces-of-eight. The Dutch prize, the Eendragt, was valued at £10,037 (pounds) 2.

Not content with this extraordinary booty, he launched two more privateers (also named Reprisal) – a sloop of 90 tons and a snow of 180 tons, 18 guns and 140 men, and took on a business partner, the prominent Obadiah Brown, a leading merchant and slave-trader.3

The plunder captured by Hopkins’ attacks on European vessels were wholly products of slave labor. Every last captured commodity and gold coin were created by slaves of the French, Dutch, Spanish and Danish in the Americas. Moreover, it is likely that some sailors aboard Hopkins vessels were themselves enslaved, including “Pompy Brown”, and “Sam Lipptt (negro)”.4 The wealth of the Atlantic slave economy buoyed the entire Rhode Island economy throughout both the King George and French and Indian Wars of the 18th century. And between wars, the Rhode Island-based triangular slave trade simply compounded the growth.

“A lawless set of smugglers, who continually supply the enemy with what provisions they want”

Steven Hopkins was Governor of Rhode Island during most of the French and Indian war (1754-1763). After raising 500 troops to fight the French, Hopkins once again turned to privateering, reporting “near fifteen hundred men are out in our privateers”. An enormous plunder was accumulated, supplying the chief source of income for the state.6

During this war, after each capture, Rhode Islanders brought their booty home, then returned captured French sailors to the enemy (using “flags of truce”), and while doing so, also traded goods with the French enemy in Hispaniola. There each day dozens of Rhode Island ships could be found trading. In light of widespread illegal “flags of truce” and trading with the enemy, Hopkins was forced to admit to British Secretary Pitt,

“Yet it must be confessed, that ’tis highly probable that some vessels from this colony…have taken in cargoes under pretence of being bound to Jamaica,… have deviated from the voyage pretended, and have put into some of the French ports in Hispaniola, where the French have admitted them to trade.”7

At the same time Hopkins was accused in the papers by his opponents of profiting from inflated fees for authorizing privateers and these same flags of truce. The charges “were largely true”, according to historians, yet he nevertheless sued the accusers for liable in court, hoping to use control of the local judiciary to win his case. However, the case was transferred to a neutral location where he lost his case and was forced to pay court costs.8

While never sitting for a portrait, it is believed Stephen Hopkins may have been painted in parody while on voyage to Suriname in 1757. If not Stephen, then likely his brothers William and Esek are those portrayed in drunken stupors, along with soon-to-be-Governor Joseph Wanton, who is about to be drenched with rum, while Rhode Island captain Ambrose vomits into his pocket.9 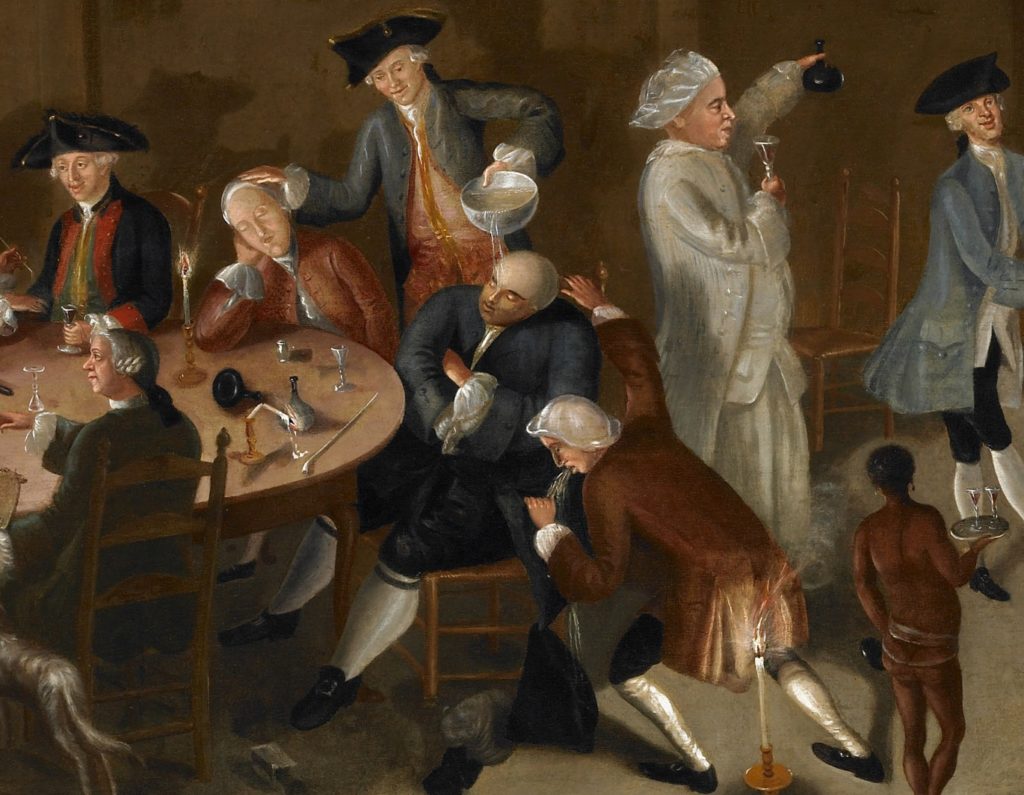 “Sea Captains Carousing in Surinam”, by John Greenwood, circa 1758

“Slavery [is] the heaviest curse that human nature is capable of.”

– Governor Stephen Hopkins, The Rights of the Colonies Examined, 1764.10

Stephen Hopkins owned at least seven slaves during his life, attested in his two wills: Adam, Bonner, Fibbo, Primus, Priamus, Prince and St. Jago.11 Hopkins for decades resisted pressure and threats of expulsion from his Quaker ‘brethren’ to free his slaves. He only finally relented in 1772 to free one slave, St. Jago.12 This slave is almost certainly the same “St. Jago Hopkins” listed as a sailor aboard the privateer Blackbird ten years earlier in 1762 during the French and Indian War.13 As a slave, St. Jago’s earnings would be owned by his master, Stephen Hopkins. However, it is unknown if this particular person was old and of little monetary value by 1772 when he was freed. Freeing an elderly slave without a bond would be greatly to the advantage of Hopkins, freeing him from the financial burden of supporting a slave in old age, a practice mandated by most towns.

Despite this one manumission, the other Quakers still pestered Hopkins. One year later, after refusing to free a female slave, he was finally disowned by the Society of Friends. Of course the Quakers, for a century among the most avid slave-traders in Rhode Island, often continued to own slaves by skirting the intent of Quaker mandates. Hopkins seemed unfazed, and though excluded from Quaker business meetings, continued to worship at the Friends Meetinghouse without impediment until his death.14

For yet another decade he refused to free his slaves, right up through his death in 1785. Even after his death, his non-adult slaves were not to be freed until they were adults, and until then were to continue serving his family members.

“[Upon my decease] to all my Negroes their freedom to take place immediately with respect to those who shall be of age and of the others the males at twenty one and the females at eighteen years of age.”15