Nicholas Benson at work at the John Stevens Shop

John Stevens II (1702-1778) was a superbly skilled craftsman, cutter of gravestones, and stone and brickmason. Like all artisans in colonial Newport, he provisioned the maritime traders, particularly the African and West Indies slave trade. The shop today houses the business of renowned stone carver Nicholas Benson.

The snow “Hardman” alone carried 653 captives to Jamaica and Barbados in three voyages in the 1750s.1

Over the course of four years, Stevens earned over £582 pounds from Banister to build ship mess kitchens.2

With profits from the trade, Banister was able to pay Stevens £992 pounds to improve Banister’s estate, embarking on a grand project of brick, plaster, lathe, pavement, and tile. This price is the equivalent to about $130,000 in today’s dollars.3

And finally, when enslaved servants died, John Stevens, himself also a slave owner, was sometimes paid to cut gravestones to mark their resting places – a fitting remembrance of his craftsmanship that survives to this day.4 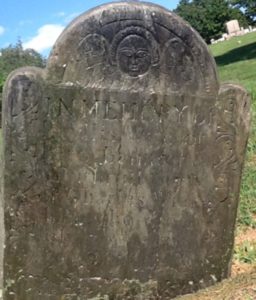 “In Memory of Phyllis, wife of Pero Banister and servant of Charles Wickham, died 30 July 1773, age about ??”