Presence of slavery and the slave trade on Bowen’s Wharf.

In the 18th century, the city of Newport was a major hub of the North American slave trade. During that time in the area now known as Bowen’s Wharf, the enslaved arrived and departed in sailing ships and labored in trades related to maritime commerce, including serving as shipbuilders, sailors, caulkers, sailmakers, carpenters, rope-makers, painters, barrel-makers and dock workers.

The wharf has had several proprietors over the past few centuries. Governor Benedict Arnold (not to be confused with his great-grandson, General Benedict Arnold) was the first registered owner of the wharf in the mid 17th century. He was president and also the first governor of the Colony of Rhode Island and Providence Plantations. Ownership then passed to multiple members of the Pelham family, including to Penelope (Pelham) Cowley in 1740, who was the heir to her father Edward Pelham’s estate. She then passed the deed to her daughter, Penelope Godfrey, who later sold it to the Stevens family in 1781. From 1849 to 1863, George Bowen acquired the wharf piece by piece from the Stevens family, giving it the name that it still has today. 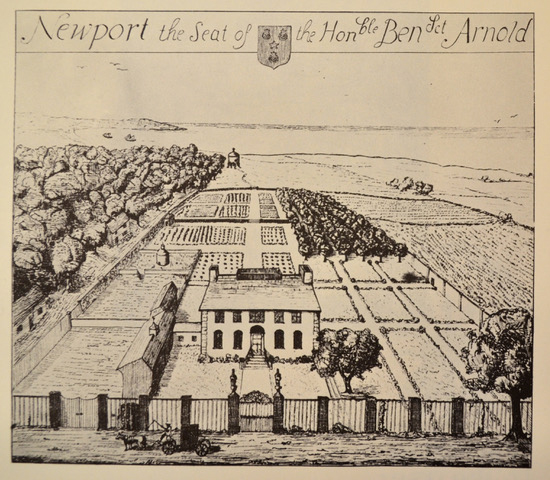 In an examination of documents relating to the ownership of the Bowen’s Wharf property, research uncovered only one document that revealed slave ownership. The 1749 will of wharf owner Edward Pelham bequeathed the enslaved Jupiter, Frank, Margaret, and her child (Newport Town Council 8: 153) to his heirs.

These documents also reveal that the chain of ownership of the wharf and adjacent land in the 17th and 18th centuries included women: Damaris Arnold (wife of Benedict Arnold), her daughter, Freelove Arnold (1661-1711), Arabella Pelham, and Penelope Pelham (1724-1756). It was Penelope who inherited: “Land on Thames Street … together with the Wharf and Warehouses thereon” and the enslaved Jupiter, Frank, Margaret. There is neither record of these four enslaved being passed or sold to later descendants, nor are there death or burial records, unusual given the wealth of the Pelham family. This may be attributed to the lack of existing merchant documents for the Pelham family and the damaged sustained to Newport’s colonial records during the American Revolution.

In an examination of contemporary newspaper advertisements, research uncovered only one known ad relevant to Bowen’s Wharf and the buying and selling of slaves. A listing in the March 1, 1783 issue of the Newport Mercury advertised the public sale of the remains of the brig, Betsey & Polly, including reference to “a likely young Negro Fellow” at Cowley’s Wharf, as it was known at the time. 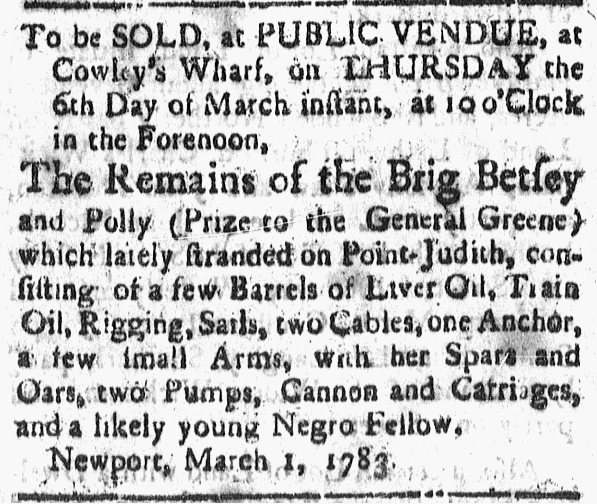 Image: Advertisement in the 1 March 1783 issue of the Newport Mercury announcing the public sale of the remains of the brig, Betsey & Polly, including “a likely young Negro Fellow.” (Newport Historical Society research report, p. 11)

It appears that the Betsey & Polly was not a single ship but two separate ships. Jay Coughtry, in his book, The Notorious Triangle, provides information on them. The brig Polly, owned by Benjamin Mason, made a voyage from Newport to Grenada in 1770, with 90 enslaved. Under Capt. Thomas Rogers, the Polly sailed to Barbados in 1772 and to Jamaica in 1773, probably with slaves or slave-produced goods. On July 19, 1773, under Capt. Robert Elliot, the Polly departed Newport with 101 enslaved aboard.

These ships probably used Bowen’s Wharf for their commerce. Plantation owners from Narragansett Country (South County) may have purchased slaves transported on these ships and used Bowen’s Wharf to ship their slave-produced goods to ports in the West Indies and on the southern American coast.

Even with the scarceness of archival documentation, it is certain that there was a presence of enslaved people laboring on Bowen’s Wharf in the trades that supported the maritime industry, and/or being transported on the ships that came and went, as well as the products that fueled the trans-Atlantic slave trade.